I normally review very few select movies which to me are best-in-class and elite; only those that I either find superlative {as one of my friends was noting on fb today}, or those with some kind of social message. The movie being reviewed today, Baghtos Kaay… Muzraa Kar, is one of the latter category;  a  Marathi movie. What makes this movie so different is this is a movie with a message, and is also simultaneously fun to watch; with two other factors also thrown in, which I shall get to by and by.
THE PLOT
The plot is simple – a sarpanch of a village of Malvans, the villagers whom The Chhatrapati recruited and turned into his army, laments the state of the forts of the great Maratha Kiing, Chhatrapati Shivaji; even as the great legend continues to hold sway over entire Maharashtra, and I daresay large parts of India as well. Most Indians will readily concede his greatness. Despite this, his forts lie in ruin or at least not as well cared for as they should be. The movie revolves around his dream of turning the local fort into a well cared for spot that attracts visitors, and how his attempts take him into politics, and focuses around his attempts to win support for his endeavour.
THE REVIEW
The movie is a great watch, and is a very enjoyable movie with a nice script, reasonably well crafted. It is a simple movie, in the sense there is no extravagance or over the top stuff. It has lovely genuinely comic moments which make for a very enjoyable watch,  and help overcome the drag. The start, most of the middle and the climax will win your heart and tug at your emotions; the middle part will make you laugh a lot, genuinely funny stuff, situational comedy. The problem is that the script meanders just a little for 10-15 minutes in the middle part; that could have been avoided. Normally, this would have been enough for me not to review it, had it not had major saving factors acting in its favour.
{Jitendra Joshi}
And these are, firstly, the performance of Jitendra Joshi. Man, what a performance! He blew me away with his superb performance. I have seen him earlier in Duniaadaari and the classic film Sumbaraan, but this time he has matured as an actor, and has almost single-handedly carried the movie on his shoulders. The way he simply blends into the character, the way his face and eyes show the expressions, was incredible. It was a display of top notch conviction, and it made my day.
The music is nothing to write home about, except the song Tu Aan Punhaa Re Ti Talwaar, a very hummable and fast paced theme song, which kind of grows on you. One wishes the other songs were as good. As I said earlier, the script could have been tighter, making for a much more compact product. Nonetheless, what is there is way more than enough; given that an Economics + History + Social blogger like me is reviewing the movie. This movie joins a list which I consider elite – Raees, Pink, Coffee Aani Barach Kaahi, Shivaay, Katyaar Kaalzat Ghusli, Lokmanya Ek Yugpurush, PK… 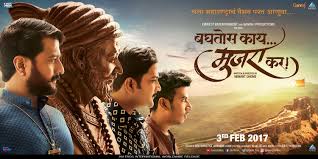 What makes this movie stand out is the other factors involved; first was the performance of Jitendra Joshi. Second aspect is the social message – it is fine that we make statues of those we value; but what about actually caring for them and their true heritage? I made this point in two or three previous posts; we call people our heroes, but ignore their heritage. In the case of Chhatrapati Shivaji, I can safely say that by and large, his heritage is also intact; people do value him. But if we value him so much, how hard can it be to ensure upkeep as well as visits to his locations?
The third aspect that makes this movie special is simply this : for the first time I have seen a movie that openly declares of the English, when the lead actors visit London as part of their plan : whatever they have is built from stolen money, stolen from us… or words to that effect! This is bound to be heard and seen by the audience who sees this; and will impress at least some of the viewers. This is a message that sorely needs to be told, and I personally loved it. As it is, I am in the middle of a by now 8-year hunt for the true and full detailed story behind our Colonial History, and this made connect with my heart big-time! Well said, Team Bhaghtos Kaay!
The fourth take-away is the extent of the contemporary feeling for, and relevance of Chhattrapati Shivaji in Modern India, or at least Maharashtra. This was a pleasure to experience; the response from the audience, the clapping, the whistling, the applause had to be experienced. And, for the first time, I too joined in, with applause in two or three places. It happened spontaneously, and I just went along with the atmosphere, discovering for myself how deep the connect of Chhatrapati Shivaji is with me… I had read and reviewed a book on The Chhatrapati, but this was something else, something deeper, a lovely, deep connect and feeling of pride and warmth! Great movie, people!
http://feeds.feedburner.com/blogspot/ffxzG

Chhattrapati Shivaji stands as one of the most celebrated medieval heroes in Modern India; it is a name that touches a chord in almost every Indian, and is a powerful force to reckon with even today, three centuries after his death. He is present everywhere you can see; he is one of the few to withstand the onslaught of naming everything in sight after the Nehru family. A Chhatrapati square her, a Shivaji Terminus there – many cities have honoured themselves with some landmark, statue, street or square in his name. Such is his current followership, and so powerful is his presence.
This makes reviewing any book related on this personality a big responsibility, a tough task  – and not one to be taken with insincerity, or with bias,  or attitude. I had always thought of The Chhatrapati as a tall personality, a commanding and great Indian; but had never given a thought to the pull, the deep connect and the powerful influence this genius had on me; as I read the current book, as I turned its pages – I learnt something of myself, and of my deep respect and devotion for this great man and Indian leader.
THE BOOK