TRAI has been publishing results of 4G speeds of various Telecom Service Providers, as reported by various news media {refer Bibliography of the article}; in the most recent update I saw, as well as the one in January, it was noticeable that most providers were providing speeds starting from 5mbps. This is surprising, and does not fully tally with my experience, tabulated in this article for the past 3 months or so. My speed tests have been done on Speedtest.net; I have also downloaded the TRAI App today to crosscheck, and while the results are comparable, there are differences. 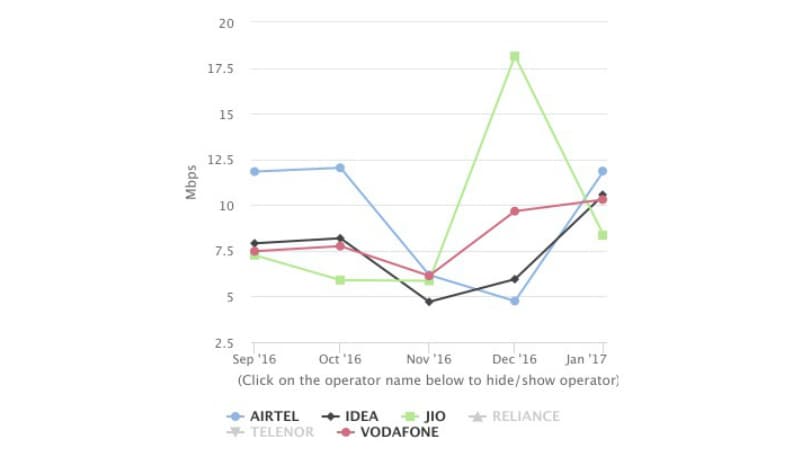 4G : The Performance
Before we look at the exact performance as experienced by myself, let us look at some history. The one caveat I place here is that while I have recorded the speeds since Nov-2016, I have not kept a record prior to this. I have used 3G in large parts of Maharashtra where I work, and Indore city my home town. I clearly recall I used to get 3G speeds between 3mbps – 5.5mbps, though the speeds in excess of 4mbps for 3G was only in Mumbai. Let us keep this in the back of our minds as we look at the current performance of 3G and 4G. Reason – read the article from 2014 linked below, wherein I have pasted a test result of 3 year ago, showing a speed of 3.22mbps download. I further recall speeds of 4mbps as well on 3G.

As can be seen from the chart above, there is a wild variation in speeds; also, please note that I used 3G till 1st January, and switched over to 4G on 2nd January. {Never mind the network brand; let that  be}. The overall 3G speeds I got during this entire period till 1st January was 2.36mbps download and 1.62mbps {all in Maharashtra} upload with a latency of 218.4. {Refer chart below}. After the switch to 4G on my visit to Indore, the experienced speed was 6mbps download and 4.98 mbps upload. In Maharashtra, I got speeds of 4.94mbps and 3.01mbps on average – which was a significant improvement over the 3G speeds I was experiencing.

But take a look at Latency : Latency is another element that contributes to network speed. The term latency refers to any of several kinds of delays typically incurred in processing of network data. A so-called low latency network connection is one that experiences small delay times, while a high latency connection suffers from long delays. {From Lifewire}. Latency numbers that we are getting – refer chart above –are upwards of 150 milliseconds on both 3G and 4G networks, as can be seen. The entire data is tabulated in excel for reader reference.

This data was collected over several months, on several networks –  I use two handsets, one a true 4G, one a LTE Band 1, 3, 7, 8 and 20 handset. This was observed on various locations – home, market, office, travel, various cities, and at various times as can be seen from the complete data set enclosed at the end of the article. I used three networks – 3G on two providers, and 4G on two providers; as well as broadband on 1 provider. In toto, I used 4 service providers while collating this data.

The Analysis
There is a significant improvement with the advent of 4G networks in my experience – the numbers are silent proof of that. However, the user experience is what matters; sadly, this cannot be quantified so easily. The actual  user experience, to be completely blunt, is that I could not notice a significant usage improvement in site loading or other internet usage, as compared to 3G. To understand this deeper, we will need to understand my internet usage.

I used the internet for video streaming quite extensively; I used email, games, net surfing various sites like news sites, google searching, recipe and cooking sites, LinkedIn, Blogging sites, telecom sites etc. I also downloaded videos, and my total data usage was in excess of 10-15GB per month in each of the three months.

I could not notice any clear advantage that I achieved, for the most part. In Video Streaming, I noticed no difference whatosoever, as in other usages, including all. The only advantage I noticed was in Video Downloading, and that too wasn’t blinding fast; there was a difference, an improvement, but it was very small. But it was there.

And therein lies the key; 4G and 3G are products; Companies & an industry depends on them. If the customer isn’t feeling the difference, you have a major potential problem on your hands. As things currently stand, no one in the industry at levels that matters is paying any attention to this. The key lies in the data – high latency speeds, wild variation in actual speed experienced by the customer, and actual speeds around 5-6mbps average – which is only slightly higher than what 3G used to deliver before the advent of 4G networks in India, at least in the bigger cities.


You sell a product or a service – your core focus should not be the fund flow, regardless of the health of your balance sheet. The corporate world abounds with case studies of companies that succeeded by focussing on the customer experience {I present one such case study next month – Google; stay connected with my blog}. This is what is required – focus not on activations / Churn / recharges, but on specifically the customer experience; given that the delivered result is not upto the mark. In the next article, we shall go deeper into this, examining specific usage examples  and deeper industry issues, identify specific usage patterns and issues at customer level, and chart a way forward. Let this suffice for now.

There is no easy answer – the service industry isn’t in exactly a great shape. Idea has a debt of 49K Cr, and has an ARPU of Rs. 157; Airtel has a debt of about 97K Crore, with an ARPU around 188, just to name two examples. Jio has already notched up 2,01,000 Cr Debt. Usage isnt taking off; the demograhic & income profile of the nation, demographic distribution are major issues, lower prices in the past 6 months notwithstanding.


The reasons for this situation are diverse – but these service providers need to understand that unless they improve the service quality to the customers, there is a near-certainty of rising Churn, as customers will try out newer options, and switch providers, much like I did. I ask the same question that I did 3 years ago – where is the market? {Internet and Digital Media – Big Hurdles} Show me the market!

And if Jio manages to give 10mbps+ speeds  regularly, this could spell big trouble for the incumbents. As we saw in the Jio Business Model Analysis, it doesnt have a choice but to succeed. That is why, at least in the major pockets, the service providers need to look at their core product offering; they cannot afford laxity on this part… Starting day before yesterday!

Data used for the analysis :