In the previous article – India’s NPA Problem, 2001-2012; we got an overview of the NPA Problem, and could see from the graphs its genesis lay in the high growth period between 2003-2008. As the NPAs started rising from 2008 onwards  they clearly pertain to investment decisions taken in the previous years. Now in any high growth period, some investment calls are going to go bad; if we play too safe – we sacrifice some growth. But, when the same investment decisions turn bad to an extent that Bank Credit to industry dries up, it becomes a serious issue that needs to be dealt with.
WHO IS RESPONSIBLE AS PER CURRENT DISCUSSIONS?
There is a tendency by some to blame the UPA Government, and some to blame the NDA Government; as I looked at in the previous article, no one is calling the industry/s to task for failing to judge the environment properly. Is it the contention of the people that 100% of all NPAs were caused by unforeseeable external shocks? There is a strong case in these numbers for the industries & the regulatory authorities to re-visit these industries norms of operation and managerial skill-sets as well as operating environments to analyse where the real fault lay.
GOING INTO SPECIFICS
Let us look at the sectoral spread of these NPAs, and the details to get a more precise idea of the ground realities. NPAs are divided into Priority and Non-Priority Sectors, as we saw in the previous article, India’s NPA Problem 1. We also saw that the significant increase was from the Non-Priority Sector, which is what I choose to focus on to drive home my point. This Non-Priority Sector includes Loans {Retail, Housing, Credit Card, Durables, Auto etc}, Infrastructure, Coal, Iron and Steel, Textiles, Power, Computer Software, Rubber, Metals, Construction, Sugar, Food Processing etc.
HOW ABOUT DISAGGREGATED SECTORAL ANALYSIS 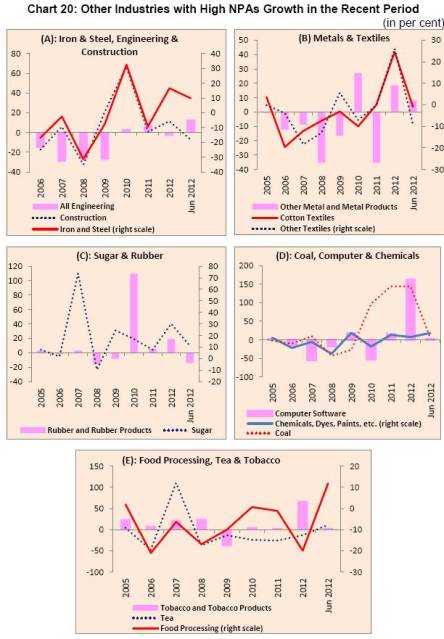 These loans – detailed in one sample chart above –  comprised investment decisions taken by thinking, responsible managers and boards basis available information, as well as their own understanding combined with industry trends and organizational strategic priorities. Given the above, this surprising tendency to question only the Banks for these NPAs is unacceptable. Agreed that looking at it from a Bank perspective allows us to study aggregated data. Also agreed that disaggregated data is near-impossible to come by, which makes any serious study of this at sectoral disaggregated level a rather specialist task. But, it can be done.
WHO IS REALLY RESPONSIBLE – ANALOGOUS EXAMPLES…
Let me start with one or two real examples of failed organizational strategies. Once upon a sweet time, an investment decision was taken by the Senior Management, and was communicated to the hapless Business Head chosen for this misadventure – me. The BH said nothing, put his head down, and started on the GTM Strategy; detailing which produced irrefutable evidence that this was a certainty for failure. This was duly documented with Top Management, who refused to agree – saying let us set a stop loss {!!} and proceed. They also stated, don’t be defensive, go all out. 7-12 months later, that industry was driven to obsolescence by market changes – it was a Technology Product, with massive unsold inventories across brands and states, for the entire industry. Who is responsible for the loans decision/s that went into the seed capital for the new division/s?
Another example – once upon another sweet, sweeter time, several companies {How do I know? From my trade, but of course! I was heading a Region in one such} ventured to take a decision to invest into products of a particular technology, or solution, despite the presence of free, rampant, ubiquitous and effervescent, bubbly and exciting new information of a new product. Now this product was costlier, so these industry veterans bethought that there will be a market for the older range- logical. But – they forget two key aspects – the rate at which costs are cut in the trade, and the probable size of the market for older products. Result was, once again – unsold stocks at distributor and company levels. Marketshare tanked, companies shut in some cases, and new products shot up. The companies have stocks of old products several times that market size. Who is responsible here?
CUTTING TO THE CHASE – AFIXING RESPONSIBILITY
In both the cases above, companies and managements lost, big-time, as the investments did not give the projected returns. Was it possible to at least limit this loss, if not avoid it? Most certainly, it was eminently feasible. Now we can either go on a blame-game, and find fault with these managements, as is the normal case; or – alternatively, we can go deeper into these cases, and find connecting threads, understand why erroneous conclusions were reached despite the presence of evidence to the contrary. Remember, these were thinking decisions reached by domain experts, good people, people who were proved comprehensively wrong. What we do is our decision now –  the choice is ours.
And that is the key point – thinking decisions, taken by good people, domain experts – proved wrong; this happened on a scale that caused the Banking Sector to come under stress, caused economic issues and other connected problems. That is what we can extrapolate from the above analogous examples given above. While I do admit not all the problems could have been foreseen, fact remains that some decisions were proven wrong. The RBI report clearly identifies such issues, if you read between the lines:
The problem of NPAs is related to several internal and external factors confronting the borrowers (Muniappan, 2002). The internal factors are diversion of funds for expansion, diversification and modernisation, taking up new projects, helping/ promoting associate concerns, time/cost overruns during the project implementation stage, business (product, marketing, etc.) failure, inefficient management, strained labour relations, inappropriate technology/technical problems, product obsolescence, etc., while external factors are recession, non-payment in other countries, inputs/power shortage, price escalation, accidents and natural calamities. According to another study, the major reasons for NPAs include improper selection of borrowers’ activities, weak credit appraisal system, industrial problems, inefficient management, slackness in credit management and monitoring, lack of proper follow-up, recessions and natural calamities and other uncertainties {See Bibliography}
That is why, looking at NPAs from a Banks-only perspective is fraught with risk; that is also one of the reasons why some experts are opining the Bank Recapitalisation is like the kicking the problem into the future – unless structural reform is not undertaken. This problem is far deeper, and is also rooted in the culture prevalent in Corporate India as well. Structural Reforms will of course mitigate the problem – as I may attend to in some future article; but these wont fully solve the internal issues identified in the report mentioned, as also proven by the two real examples shared above. The question we should be asking ourselves is simply this : how can we ensure better decision making within our organisations? This is something I intend to try and answer on these pages, which document my thoughts… stay connected!
BIBLIOGRAPHY
RBI Working Paper Series No. 03 Re-emerging Stress in the Asset Quality of Indian Banks: Macro-Financial Linkages
RBI report warns of more NPA pain, sees bad loans topping 10% by March 2018
http://feeds.feedburner.com/blogspot/ffxzG