Re-Imagining India – Unlocking The Potential Of Asia’s Next Superpower is a collection of essays by an eclectic mix of writers from various fields, Indian as well as foreign, edited by McKinsey & Company. It is subdivided into 6 sections : Reimagining, Politics & Policy, Business & Technology, Challenges, Culture & Soft Power, and India In The World. The authors of the essays range from Foreign Policy experts, to businessmen, to eminent Indian sportspersons, to journalists – listing some pretty famous and accomplished individuals from the various fields. Out of a total of approximately 63  essays, approximately 21-22 are by foreign authors; this gives a nice gives, while also being revealing 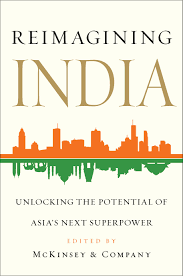 THE NEGATIVES
First, for a book on Reimagining India, I got the distinct impression that the focus on agriculture was woefully inadequate, underrepresented – and in some ways questionable.  Agriculture & Rural India comprises the majority of the people, of employment; by contrast, there were few essays on this topic. The few that were present did not deal with the issues by and large. In fact, only one dealt with the relevant issues directly – India’s Farms, Harvesting The Future on Pg 247. Agreed that Energy, for example, is an issue – but when you give more real space that as opposed to Agriculture / Rural Sector, then it becomes hard for me to see how you can re-imagine India!
Second, several write-ups by foreign authors {Exceptions prove the rule} are preachy, slightly impractical; and in at least one or two cases, unimplementable and objectionable. For example, the foreign policy “experts” who opined, some of them at any rate, were off the mark by nearly 100%. The Americans were quick to shift the blame, as I perceived it, off their own shoulders, and advising India to take the forward step! What else have we been doing all these years? So, that part was frankly the worst in the book. But it does serve to highlight the fact that The West still has somewhere near zero idea of India, sadly.
THE POSITIVES
There were many top essays that provoke thought – all of them by Indians, bar one. Next time, kindly use more of Indian Authors – people who understand India, not look at it through either rose-tinted, partially informed, uninformed or through biased lenses! And that one is the Polio essay by Bill Gates, which was stupendous to put it mildly. Moving on, I recommend the thought provoking essays by Ruchir Sharma, Anand Mahindra in the first section; topping it with the classy Gurcharan Das essay dealing with hard reform, dealing with citizens and institutions.
The book comes alive in the second section, with a series of really educative essays starting off with Sonia Faleiro on Rural Women empowerment, and Shekar Gupta’s Something Is Working being topped off with Ashotosh Varshney’s essay on regionalism, language, diversity & federalism – these make the forceful point that our decisions on Language, Federalism are excellent. There were many other essays that are noteworthy: Aziz Premji is another example. I found the western critics in this section uniformly negative, which is strange considering the topic. You don’t reimagine by criticizing; you do so by suggesting positivity and change for what isn’t working. There is a fine dividing line.
The third section is on Business; and misses the bus by somewhere around 81%. The Indian Economy is 19% Corporate India, around 60% MSME + Unorganised, and rest Agriculture. Not one of these latter 2 – not one- appeared significantly anywhere. What is more, I noticed 9 of the 16 essays by non-Indians! Who is expected to know more about my economy & business environment – Indians, or outsiders? Among all the 16 essays, I found barely 2 or 3  upto the mark, so I shall not name them. Suffice it to state this section was uniformly preachy or anecdotal.
The lackluster third section is made up for by the fourth section – 100% Indian almost, or at least Indian Origin {if anyone was an NRI or PIO – I don’t know, didn’t check}. Again, slightly skewed – what is our biggest challenge? Without a shade of doubt, it isn’t energy; it is Poverty and Rural Employment specifically agriculture. Energy is but an offshoot of vaious sectoral challenges- and is a part of the solution. But you cannot give a proper solution without first defining the problem! And here, one essay – India’s Farms – Harvesting The Future by Barnik Maitra and Adil Zainulbhai stands out as best not just in the section, but in the entire book.  That said, this section does identify Health care and education – brining some sense of balance to the book, elevating it to a large degree.
The fifth section again loses it – cannot understand the relevance of Mumbai Movies, Cricket, Chess, Western impression of our culture and arts, restaurants, and Olympics – not to Reimagining India! Not when we have other pressing concerns. Nonetheless, most of the essays in this section are good, and  written by Indians by and large, thus practical and realistic. The one that stands out- Suhel Seth on The Fourth Estate – kudos for that one.

The sixth section is preachy in its foreign policy; you can safely ignore 100% of foreign policy essays in this as impractical, and / or one-sided views as the case may be. But in this lackluster segment – two essays lift it on their own single shoulders each; the heart-warming, and yet though-provoking class write-up by Kumar Manglam Birla on adapting to changing environment, India as a nation and more; and the top piece by Ahmed Rashid on India-Afghanistan
THE CONCLUSION
All in all, rated two-and-a-half stars. The essays are good – by and large; the ones that identify the problems & suggest probably solutions; or the ones that impart positivity. The critical ones- God knows we have much to be critical about – well, frankly – it is dead easy for an outsider to criticize – what about a solution? Have you lived here? Are you aware of the ground realities? And the Indian articles that criticized, well – they were correct, and spot-on; but taken all together, the book simply fails to connect, and does not achieve its objective of Re-Imagining India. It gives an excellent idea, to be fair – but the negatives pull it down. Not worth the original price; I got it as a hefty discount!
http://feeds.feedburner.com/blogspot/ffxzG