I am not a movie reviewer, or blogger; but every once in a while, I come across a movie that leaves a deep impression, an impression spanning every aspect of the movie; which is what moves me to pen my thoughts on the aforesaid movie… the movie under review, Coffee Aani Barach Kaahi, is one such – a lovely light romantic movie that is, for me, unforgettable; one I can watch any number of times – like Mumbai-Pune-Mumbai…. 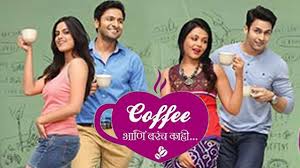