In the previous articles on the farming scene in India, we saw the basics of farming, and a look at the economics of Paddy in a few states in India. In this article, I shall go deeper, and add another crop : Wheat, as usual with data. The assumptions remain the same as they were in the previous article on the subject, which can be found here : INDIAN FARMERS : A LOOK AT ROUGH ESTIMATES OF PROFITS 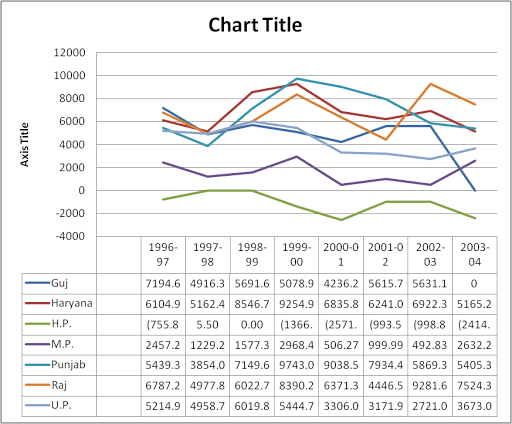 In the previous article, we looked at the returns from paddy; let me present another view from the same data set :

The chart above is average earning from Paddy crop calculated on C2 Cost Concept. The C2 Cost concept includes cost of seeds, fertilizers, manure, human labour including family and hired labour, animal labour, machine labour both hired and owned, insecticides, irrigation charges, interest on working capital, rental value of owned land, rent paid for leaded-in land, land revenue cess and taxes, depreciation and interest on fixed capital.
This is called the c2 concept; there is another concept – the c3 concept which includes value of managerial input of the farmer. These costs have not been accounted for. It can be straightaway seen that if you add 10% to the costs, profitability of the Farm as a business enterprise takes a nose dive. And also note the states for which the data is being collated, and the returns from the less developed states.
Furthermore, now I ask all of you to compare with a  running business enterprise, and try and identify expenses that we incur while running the business which are allowed as deductibles. This last bit may not be acceptable anywhere, but you cannot deny that a business enterprise is allowed deductibles on several and sundry items as costs incurred in running the business apart from the expenses listed above; it is easy to note that these costs are not accounted for here; it is also a given that other costs would perforce be incurred. Lastly note that the trendline pf the average on all states in both cases over 7-8 years from 1996-97 is either flat, or decreasing; in one chart I have presented the trendline – that for Paddy.
Now please remember these are numbers collated for the entire farming universe, which includes Small, Medium and Large farmers. So it is also a given that these returns, such as they are, will not be enjoyed by every farmer, and will be skewed in one side or the other. Small farmers and Medium farmers will have a different calculation, the numbers for which are not readily available. Having said that, there are other indicators from which we can draw a parallel – like the per hour costs on various items, or the various reports on several aspects of SM Farmers in India which give several pointers and more. But more on that later.
Now take a look at the absolute numbers of profit that are coming out. It is ranging from a loss of 1400 Rs per crop, to a profit of 9700 approximately per crop. What can a family do in that meagre amount? Take a look at other constituent data, like wages charged. The wages for AP for Paddy ranged from 2491 – 3097 per crop. Another 7000-9000 was rental value or rent paid per crop. These numbers are per hectare, and are similar across all states I have taken in the calculation.
What can a family do in 12000 – 20000 per 4 or 5 months, even if we consider gross receipts, and not account for other expenses? Does making profit simply mean cash flow profit, and can we then jump to the conclusion that all is well with farming given they register a net cash flow? What about standard of living? Look at the wages being charged to account, and think of what you charge to accounts in business? Or just take a look at it from a simple living perspective and family needs perspective! Are these people not entitled to improvement and growth? We in business pay our employees handsome salaries, give perks, all comforts, expenses; we register a net profit after deduction of a whole list of expenses which are chargeable to running a business. Can we say the same for the farming community of India basis the data presented?
And remember this is data from all farm sizes. The question then arises what is the dimension of the farming landscape in India? These people stay on the farm or near it; Agriculture forms a principal part of their business; they are people with no other skill sets. Even in the best case scenario, the state of the small and marginal farmer is evident from these hard numbers, which are based on national averages, including returns from large holdings, which will perforce be different. Lastly, this data is from 2003-2004; we shall subsequently tabulate data from 2014, and examine- or try to get a rough estimate, of the progress in the past 10 years – this will give us a rough and ready estimate of the development of farming scenario in the past decade
This is the reality of farming in India… and the moment we start delving into the number even deeper, further and more serious issues begin to emerge. Given that I have taken data from 1996-2004, let us examine land holdings in India from the same period, and establish a bird’s-eye view of the Indian Agricultural scenario, before we move into the policy and political realm for a further analysis.
For this, we can refer the report “A Special Programme For Small And Marginal Farmers  – National Commission For Enterprises In The Unorganised Sector“; the pie chart  I have created for easy readability. These give you a precise idea of who is representative of the farming scene in India : the small and marginal farmer, or the large farmer?