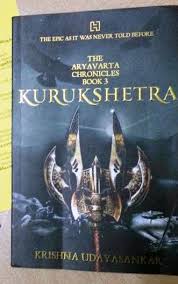 The book says that it is “The Epic As It Was Never Told”; well, it is all of that. This is a book that has churned up everything in The Mahabharat, and made it into a story that is unbelievable, and incoherent. I rate it 2 stars out of 5, at the most 3 stars; and these are for the writing and the prose, which is top-notch. Credit where credit is due. Not only that, the plot build-up and the entire story is told in a stupendous and taut narrative, literally edge of the seat stuff throughout, and at a frenetic pace.
This is the third part of the series, and straight off let me clarify : if you haven’t read the first 2 parts, dont come anywhere near this book. It will be a task just to make sense out of it all. In the initial reading, I was so irritated at the lack of clarity that I just up and quit reading this book. Then, I sat for a while after lunch, carefully read the initial character list, made associations in my mind, and re-attacked the book; only then did the story begin to make sense.
This part of the series deals with the last part of The Mahabharat; from the pre-war negotiations to the end of the epic. The war itself takes up a very large part of the book, with the political intrigues and negotiations, punches and counterpunches making up an exciting and taut first part. Once you make sense of the story and the characters, the flow is effortless, and the story riveting.
The real key to enjoying this book is rising above your own feelings : that is the hard part. You have to take this not as a retelling of the epic, but just as another war story between two clans: that is what it is. The story told has no similarity with The Mahabharat. I shall not state more, as I am not an expert in the epic. But I have read extensively on ancient India, as my book reviews reveal; and to me, the story told does not have any resemblance to The Mahabharat.
It almost reverses the role of the Pandavs and the Kauravs, it places entirely unwarranted interpretations on various aspects of even relationships; and presents an ugly picture of almost all the good characters. In fact, all characters are etched in dark shades, with an ugly machiavelian side to them. It places the intent of the war as the creation of a land ruled by the people; it presents the various characters in completely different and unbelievable shades.
In fact, if anything, this book is the exact reverse of The Mahabharat in more ways than one, and contains many what I can call errors. Some of these are extremely offensive, and have the capability to infuse some passion. Most critically, the one significant flaw in the book as it seems to me is the one of recency bias; the interpretation is modern; it imposes modern cultural values and modern norms, societal and political constructs and behaviours into the and onto the ancient world.
For example, the emphasis on a war meant to create a land for-the-people and by-the-people. The earliest form of this was admittedly in ancient India, with the Gana Sanghas – but even these were not strict democracies, and were oligarchies. There is no record of any other venture than the Gana Sanghas in ancient India. And as I stated, even these were ruled in turn by the intelligentsia.
The entire play between characters, the presentation of the women, the love stories, the behaviour of both the good and the bad characters just does not ring true; I have read some aspects of the Vedic period culture, and when I keep that in mind, this is elevated even further. The story seems post-modern in everything, but told in an ancient setting. The behaviour, the norms of the society, all are instantly identifiable and recognizable as modern, right till the last character. The interpretation of ancient events  is attempted from a modern time-frame, not in the setting in which these happened. The entire sequence of events just does not click…
But, if you can rise above these inconsistencies, then this is a really good piece of fiction. The story is fast-moving and told at a frenetic pace; the plot is exciting and contrived, albeit inspired by The Mahabharat. The characterisation is slightly minimalist, but that is only to be expected in a work of this scale and scope, spanning generations and dozens of characters. And, the icing on the cake : the level of complexity is far greater than most books in the fiction genre. My rating : zero stars as a retelling of The Mahabharat, and 5 stars as a work of pure fiction!

This review is a part of the biggest Book Review Program for Indian Bloggers. Participate now to get free books!